The Raketa Marine, a classic among Russian watches with a little secret…

Raketa Marine is one of my favourite classics, one of the most famous and sought after Raketa 24h watches. Produced during both the Soviet and Russian periods. Often listed by collectors as a “must-have” to start or complete a collection. One of the most aesthetically pleasing Russian watches.

If we look carefully at the dial we can easily distinguish three main functions.

The watch is fitted with a Raketa calibre 2623.H ( 26mm in diameter, manual winding only, 24h with antishock).  HERE is a small guide on Russian calibres. So it’s a typical, if not the typical 24h Russian watch. The time reading is not as complex as you might think, just consider that the hour hand makes a turn on a full day and not twice as in the watch we are used to. This involves a gap between the hour indices and the minute indices that we will explore later. The watch in its various versions, Russian, Soviet and branded GOST, differs little. The Raketa Marine is always clearly visible and easy to read.

One of the distinguishing features of this watch is the rotating inner ring, adjustable by a special crown placed under the charging hour “8”. The ring has a very simple use and serves to identify the times of the watch shifts. The latter in the navy are made by 4 hours of the guard and 4 hours of rest. The three watch shifts and the three rest shifts, therefore, make up the total 24 hours. The ring is swivel to conveniently set the beginning of the first round. At this point, however, the mysteries of the Raketa Marine begin… Does the fact that one of the four-hour shifts is in red and the other two in blue have any meaning or is it just to highlight what is the first round? Experience tells me that the Russians are very precise and never do things randomly. On this aspect, I have yet to investigate, although probably the hypothesis of indicating the first round remains the most plausible.

[EDIT: 05/03/2022] There’s also another theory on the internet about the dashed lines on the quadrant. Some say they give sailors shower times. From what I have been told the issue has been dealt with on some Russian forums, it seems watch.ru, but personally, I can not find any trace of it.

But the densest mystery that has surrounded the Raketa Marine for some time, which I hope I have solved once and for all (maybe for someone it was clear, but many people, if asked they could not answer ), concerns the blue lines on the dial between 6:00:00 and 7:00 and between 18:00 and 19:00. It is these graphic symbols that it is not very intuitive to give a purpose within the day. The “mystery” of Raketa Marine is solved as usual with careful observation and a little’ in-depth research.

As I said before, the Russians are very precise and looking at the dial of this Russian watch you can see that the lines are blue, like the minute indexes and not like those of the hours, which are black.

If you pay even more attention you can see that the lines are aligned with the hour indices and not with the hour indices. Made this observation and collected information on what can happen for three minutes every half hour and not for two hours every 24 is found in a well-known practice inside the ships (on a Raketa Marine everything makes sense), namely the “radio silence period”.

What is “Radio Silence”?

In a very simplistic way, it is a few minutes (precisely 15-16-17 and 45-46 and 47 minutes of each hour) in which radio operators are asked not to carry out transmissions but to listen to allow to pick up any SOS launched from ships in danger. This period concerns only the telegraphic listening frequency of 500 MHz. There is also another period of listening of a different frequency to pick up any radio messages of MAYDAY.

The topic can be deepened on this page in English: RADIO SILENCE

On the net, there are many examples and two often used are of famous Soviet clocks and watches:

Probably due to issues related to the legibility of the dial of the watch, only the period related to the 500 kHz telegraph transmissions was highlighted.

The practice of listening on medium waves at a frequency of 500 kHz went into disuse in 1999 after about 90 years, replaced by systems much more modern and reliable. At the time of the design of the Raketa Marine so the practice was still in use.

HERE are interesting insights in Italian about the use of this frequency.

I hope that with this reasoning we can consider all the doubts that have surrounded those small blue lines present on the dial of the Raketa Marine.

On closer inspection, however, there are many “Radio Room Clock” that report only this band. They are probably from the period before the introduction of the full one with the 4-time bands.

Here is a historical example. 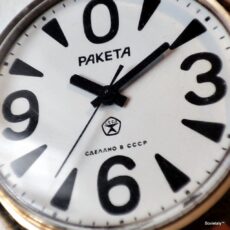 Ostwok, a Russian watch pretending to be Swiss.